Reports are increasing:  For several years there have been increasing reports of damage to health from those who live near oil and, in particular, gas wells, more of which are in closer proximity to many more residences than ever before.  These ailments include asthma, autoimmune diseases, neurological disorders, headaches, cognitive impairment, dizziness, skin rashes, nosebleeds, heart palpitations, insomnia, and nausea – and stress effects from noise, lights, traffic, and simply having ill health to deal with – not just for a handful of people but many. In most cases, those who are made unwell have no recourse, are often stuck in their homes (sometimes with contaminated water sources); and such incidences are rarely even tabulated by health or environmental authorities.

Children as sentinels:  From a book entitled The Real Cost of Fracking:  “In addition to animals, children are inadvertent sentinels.  Because of their higher metabolic rates and immature neurologic and detoxifying systems, children are at higher risk of developing adverse health effects from environmental hazards…”  And indeed, many many families report illnesses of their children and grandchildren whose onset they correlate with wells and infrastructure nearby.

In the media:  The online List of the Harmed compiles details (the vast majority from published news accounts) of over 21,650 people negatively affected by gas and/or oil wells and/or infrastructure. Most are related to fracking, as the list’s sponsor is in Pennsylvania – but not necessarily.  Most are about health issues (human and animal), some about property devaluation and threats of eminent domain, some about injuries on the job or from induced earthquakes, and on and on.

Scientific investigations:  For those who discount anything not from a medical journal, see the hard science Compendium of Scientific, Medical, and Media Findings Demonstrating Risks and Harms of Fracking (Unconventional Gas and Oil Extraction), published by Concerned Health Professionals of NY, 3rd ed. Oct. 2015.  This, again, is not only about effects of hydraulic fracturing but often of oil and gas development in general.  It includes information about animal health as well as human, about pollution, earthquakes, agriculture, property issues, jobs, crime spikes and other community ills.
HELPFUL LINKS

‘Canaries in the coal mine’:  From an article from Physicians for Social Responsibility:  “Animals can be used as sentinels of human health because of more frequent exposure to air, soil, and groundwater and more frequent reproductive cycles.”

Disturbing health effects:  Animals as well as humans are disturbed by the noise and lights, and harmed by the chemical pollution, associated with this industrial activity.  Many pets and livestock become ill along with families living near gas/oil wells and plants, from breathing polluted air or drinking contaminated water.  Livestock may have trouble breeding or carrying healthy offspring to term.  Obviously there are economic implications for ranchers and breeders.

Livestock and wildlife can become ill from accessing toxic wastewater stored in open ponds, and animals can be affected by eating any vegetation that has taken up contaminants from spills or leaching of toxic solid wastes.  A study of EPA inspections (of which there are relatively few compared to # of wells) of onsite disposal pits showed problems at over 60% the sites – including many bird and animal corpses nearby.
HELPFUL LINKS

On-the-job risks:  The oil and gas fields are among the most dangerous places to work.  Long work hours, and sometimes inadequate training, lead to many injuries and deaths among field workers and truck drivers.  Workers are also exposed to many toxic chemicals and gases on the job, as well as naturally occurring radioactive materials (NORMs) drawn up from the ground in ‘produced’ water and drilling wastes.

From the OSHA website:  “Three of every five on-site fatalities in the oil and gas extraction industry are the result of struck-by/caught -in/caught-between hazards…  Workers might be exposed to [these]… from multiple sources, including moving vehicles or equipment, falling equipment, and high-pressure lines.”

Exaggerated claims of employment solutions:  Most new jobs that are created are temporary, associated with drilling and building infrastructure – and many of these are filled by expert teams from out of the area.  Since most jobs that remain tend to be dangerous and heavily demanding, hirers are apt not to inquire closely into the backgrounds of applicants… which contributes to the boosting of drug use and crime rates in areas under development – not a savory environment either to work in or to live in.
HELPFUL LINKS

Public health effects are manifold:  From the Compendium listed above (pp. 71-77):  “By several measures, evidence for fracking-related health problems is emerging across the United States.”  (And this is not just about fracking.)  “In Pennsylvania, as the number of gas wells increase in a community, so do rates of hospitalization.  Drilling and fracking operations are correlated with elevated motor vehicle fatalities (TX), self-reported skin and respiratory problems (southwestern PA), ambulance runs and emergency room visits (ND), infant deaths (UT), birth defects (CO), and low birthweight (multiple states).  Benzene levels in ambient air surrounding drilling and fracking operations are sufficient to elevate risks for future cancers in both workers and nearby residents, according to [18] studies.”

Many industry costs are borne by local jurisdictions:  Costs to communities rise to provide emergency responses, law enforcement, and medical care where response teams may not be properly trained and equipped, crime rises, and where industry operators don’t provide medical insurance (quite often the case).
HELPFUL LINKS

In residential areas:  Many private mineral rights owners have leased to the most active gas & oil developers in Idaho.  The State has lease tens of thousands of acres of State-held mineral rights, including under the homes of hundreds of unsuspecting property owners who do not own their own minerals.  Many of these are in large subdivisions where property values are – or were – high; yet they (along with all those other neighbors of those who have leased) are slated to find themselves living very near gas or oil wells and/or infrastructure.  Aside from likely loss of property values, this industrialization of rural and suburban areas is a far cry from people’s expectations of enjoying the use of their property – and far different from the prospect of oil & gas development ‘out in the boonies’ somewhere.

What is entailed:  Every well is drilled (usually 24/7, with noise comparable to a jet takeoff) on a 2-acre minimum well pad, which is then serviced (truck traffic) continually at intervals.  Noisy and toxin-emitting compressor stations are also needed (with ‘gathering line’ pipelines), either on the wellsite itself or elsewhere locally; similarly, storage tanks or pits are planned, onsite or not.  Lights will likely be kept on during the night at wellsites.  All wellsite equipment (and trucks) emit unseen fumes (fugitive emissions visible only with FLIR infrared cameras).

Quality of life can change dramatically (and irretrievably, for those who can’t afford to move away) when gas and oil comes to town.
HELPFUL LINKS

IF YOU NEED HELP NOW WITH ANY OF THESE ISSUES NOT EXPLAINED IN THE RESOURCES GIVEN, YOU MAY FIND ANSWERS ELSEWHERE ONLINE…  BUT IF NOT, WE INVITE YOU TO CONTACT US

WHAT YOU CAN DO:

DOCUMENT EVERY ODD THING YOU SEE 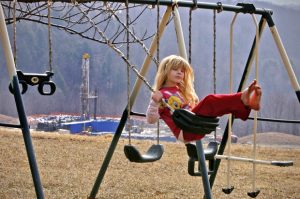 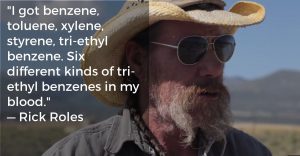 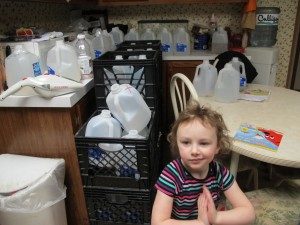 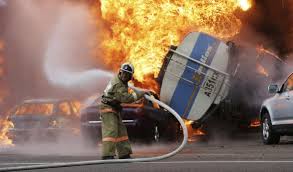 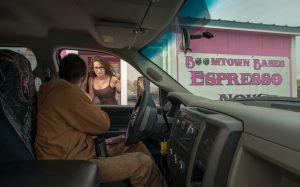